There is no information as to the identity of the anchoress and mystic, Julian of Norwich.  She may have taken her name from the parish church of St Julian in Norwich, where she had her cell, or the church may have been named after her.  It is speculated as to whether she was already an anchoress, or a nun at the Benedictine priory of Carrow or a laywoman.

Julian is known through her one work, Revelations of Divine Love, which contains her reflections on a series of sixteen visions of the crucified Christ, which she received in 1373 as she lay apparently dying.  The book was the first written in English by a woman.

In her work Julian reveals that at the time of her visions she was thirty and a half years old, and that she was in her own home.  This suggests that the year of her birth is 1342 and that she was either unmarried or possibly a widow.

Julian’s writing has a distinctive blend of orthodoxy and originality.  She wrote that God should be seen as all-loving rather than all-powerful.  Her best known words are ‘All shall be well and all shall be well, all manner of thing shall be well’.

It is believed that at some point before 1394, she became a recluse and recorded her visions.  In 1413 she was visited by the visionary Margery Kempe of Bishop’s Lynn.

References of bequests in 1415 and 1416 imply that she was still alive at these times.

Julian’s work has been handed down through three seventeenth-century manuscripts, copied by the English nuns of Paris and Cambrai.  The text was also printed by Doctor of Theology and English Benedictine monk Serenus Cressy in 1670, almost certainly in England.

Her cell at Norwich was rebuilt following substantial damage during Second World War.  The Anglican religious order of All Hallows Ditchingham (who have the house next to the shrine) maintains the shrine. 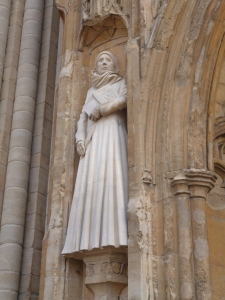 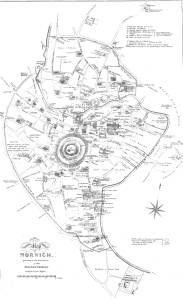 ‘Norwich in the Middle Ages’, The Religious Houses from R. Taylor ‘Index Monasticus’ 1821 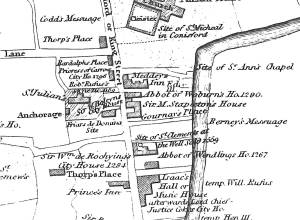