Anna Gurney, scholar, poet, philanthropist, translator and first female member of the British Archaeological Association, was born on 31 December 1795, the youngest child of banker Richard Gurney and his second wife, Rachel.  She and most of her relatives were Quakers.  Due to childhood polio she was confined to a wheelchair.  At an early age she learnt Latin, Greek, Hebrew, and Old English. In 1819 she privately published, A Literal Translation of the Saxon Chronicle: by a Lady in the Country.

In 1825, after the death of her mother, Gurney went to live at Northrepps Cottage, near Cromer, with her first cousin, Sarah Buxton.

Anna purchased a Manby Mortar (used to fire a line to a ship in peril) for the town of Sheringham to help save the lives of shipwrecked sailors.  She was known to have herself carried down to the beach to direct its operation.

She took a great interest in the emancipation of slaves, and for the education and welfare of poor children.

Anna made a journey to Rome, and then visited Athens and Argos. Sarah Ann Nichols travelled Europe as Ladies Maid to Miss Gurney and Miss Buxton documented these travels in a diary available at the Norfolk Record Office (NRO, MC  2784/H/10).

In 1845, Anna became the first female member of the British Archaeological Association, and published two papers in the Archaeologia.

In her later life, Gurney studied Danish, Swedish, and Russian literature, and was an important translator of the works of Daniel Solander, botanist.

After a short illness she died at Keswick Hall, near Norwich, the residence of her brother, Hudson Gurney (1775–1864), on 6 June 1857, and was buried in Overstrand Church, near Cromer, on 11 June. 2000 people attended her funeral, and her coffin was borne by local fishermen.

Find out more: You can see a pencil sketch of Anna Gurney at the Norfolk Record Office -NRO,  MC 2784/G/11 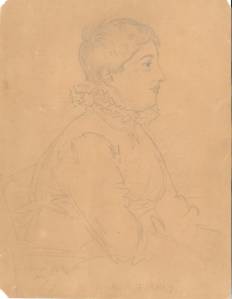