Frances Burney, writer, was born at King’s Lynn, Norfolk, on 13 June 1752, and baptized in the chapel of St Nicholas on 7 July that year.

In 1760 the family moved from King’s Lynn to London. Her mother, Esther, died on 29 September 1762 after a long illness.

In October 1774 the family moved into a house built in the 1690s for Sir Isaac Newton, which contained an observatory.

Fanny’s writing was initially kept secret apart from a few close family members (excluding her father),  Evelina, or, A Young Lady’s Entrance into the World  made its appearance in 1778. The book soon achieved received favourable reviews in the London Review and Monthly Review.  Its authorship was eventually revealed to Fanny’s father and the rest of society. Booksellers in London and the fashionable spas were unable to keep up with the demand.

Frances was urged by family members to write a comedy. Accordingly she produced a play entitled The Witlings, satirizing the literati. However, her father feared that some of the characters were identifiable as real people, this discouraged Frances and the play was abandoned.

By early 1781 Frances had completed a draft of the first volume of Cecilia, her second novel, a much longer work than Evelina. Cecilia, or, Memoirs of an Heiress was published in five volumes on 12 June 1782 in an edition of 2000 copies, which quickly sold out. The publishers, Thomas Payne and Thomas Cadell, had paid her £250 for the rights;

Through her contacts with Mary Delany, a court favourite at Windsor, Frances was presented to the king and queen, and  received an offer to serve as second keeper of the robes to Queen Charlotte. Frances accepted the position which came with a salary of £200 per year, along with provision of a footman and a maid, though she did not relish being separated from family and friends .

During the next five years her journals chronicle the dismal succession of uneventful days at Windsor and Kew, in the company of a narrow circle of unexciting people. This was finally shattered by the onset of the king’s first serious attack of mental illness in 1788, which prompts some striking passages in the diary, including the king pursuing Frances around Kew Gardens. She wrote a number of tragic dramas while at Windsor, but by this time her health was failing and Frances was allowed  to resign her post on grounds of ill health. It took another six months before she was permitted to retire on half-pay, so that she could leave office on 7 July 1791.

Frances Burney’s health improved and whilst visiting friends met exiles from the French Revolution including Alexandre-Jean-Baptiste Piochard D’Arblay (1754–1818), a career soldier and former adjutant to the marquis de Lafayette whom she married at St Michael’s Church, Mickleham, on 28 July 1793.  Their son, Alexander Charles Louis Pichard, was born on 18 December 1794.

Frances achieved her most spectacular success in commercial terms. She began a new novel entitled Camilla, the author was paid £1000 for the copyright and gained at least as much again from the subscription.

The profits from this book enabled the family to build their own house called  Camilla Cottage.  In 1802 the family moved to France where they stayed for the next ten years.  In September 1811 Frances was diagnosed with  breast cancer and underwent a painful mastectomy carried out with no anaesthetic, performed by Dominique-Jean Larron, military surgeon to Napoleon. A year later she was allowed to return to England with Alexander, who was now seventeen, and soon to begin studies at Cambridge. In March 1814 she published her last novel, The Wanderer, or, Female Difficulties, which drew on her own experiences as well as those of family members Frances received £1500 for the first edition of 3000 copies, sales were not as successful as previous books.
Frances returned to Paris after the fall of Napoleon in November 1814, when her husband regained his position in the army. D’Arblay took an active military role during Peel’s ‘hundred days’, and Frances rejoined him in Brussels in time to witness events leading up to Waterloo (it is likely that William Makepeace Thackeray made some use of her journal entries in Vanity Fair). Her husband received an injury during the campaign which forced him to retire from the army. In October 1815 the couple returned to England settling in Bath.

Following the death of her husband on 3 May 1818 much of her time was devoted to assembling the Memoirs of her father, ultimately published in three volumes in 1832. Her son  Alex, died of  a sudden fever on 19 January 1837. Frances herself died in London at her home, 29 Lower Grosvenor Street, on 6 January 1840. She was buried alongside her son at St Swithin’s, Walcot, Bath, on 15 January.

Frances Burney became better known to the world in stages as successive portions of her journals were published after her death.

Frances Burney was described by Virginia Woolf as the mother of English fiction.   She was identified as one of the first successful female novelists and has been acknowledged for her contribution to the development of the novel, especially in the creation of a genre in which women were portrayed in realistic social settings, which significantly influenced Maria Edgeworth and Jane Austen.

A memorial window to Frances at Poets’ Corner in Westminster Abbey was unveiled by her great-great-great-great-nephew Charles Burney at a service on 13 June 2002.

Find out more: You can see original documents about Frances Burney at the the Norfolk Record Office here and The Burney Centre at McGill University here 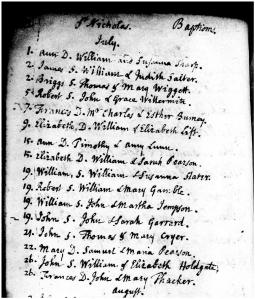 NRO, MC 55/67, 506X4
Partridge Family of King’s Lynn, colour plate taken from ‘The Connoisseur’ of portrait of Fanny Burney by N. Hone in King’s Lynn Town Hall, and article on Burney from the ‘Daily Herald’