Edith Louisa Cavell, war nurse and heroine, was born on 4 December 1865, the first child of the Revd Frederick Cavell, a Church of England clergyman, and his wife, Louisa Sophia, in Swardeston vicarage, Norfolk.

Edith was educated at home and then at boarding school.  She began her working life as a governess in Brussels, where she stayed for six years.

Edith returned to England in 1895 to help nurse her father, and then decided to train as a nurse. She registered at The London Hospital School of Nursing on 3 September 1896, followed by training in Bow she then worked at various London hospitals, and then Manchester before taking a post as director of a nurses’ training school – Berkendael Institute – in Brussels in 1907. The school was the first of its kind in Belgium, and one of the first in Europe

Plans were drawn up for a new building, however these were halted by the onset of the First World War.  The work of the hospital continued and Cavell began to assist in the escape of allied soldiers. Use was made of the hospital, with soldiers often disguised as patients. The soldiers were provided with money and guides by Belgian Philippe Baucq (links to a page in French).

In a short space of time, the work with the escape organization took over Cavell’s life. About 200 men were helped to escape. The Germans became suspicious and began to pay frequent visits to the clinic. Edith was arrested on 5 August 1915,  she was detained and on 7 August put in solitary confinement in the prison at St Gilles, Brussels. Others involved in the escape organization were also arrested and imprisoned.

Nine people were court-martialled on 7 October 1915. The following day, five were sentenced to death, and four to periods of hard labour. Three of those condemned to death had their executions adjourned while pleas of clemency were heard, but Cavell and Baucq were ordered to be executed immediately. Cavell remained outwardly calm, and prepared for her death by praying and reading, and by writing to her family and nurses. In spite of intense diplomatic activity across Europe, particularly on the part of the Americans through the tireless efforts of the US minister in Brussels, Brand Whitlock, and an international outcry against the Germans, she was shot at dawn on 12 October 1915.  After the war there was a funeral service at Westminster Abbey, and on 15 May 1919 her body was buried in Norwich Cathedral.

Find out more: You can see Edith’s baptism record at the Norfolk Record Office – NRO, PD 199/4, as well as many other documents relating to Edith, including letters, postcards and photographs – click here and type ‘Edith Cavell’ into the search box.  You can view photographs of Edith Cavell, her funeral and the unveiling of her statue in Norwich on Picture Norfolk here. 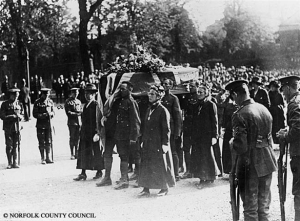 Grave of Edith Cavell at the east end of Norwich Cathedral. There is a graveside service here every October.
Photographer K. Gaffney, 2013.